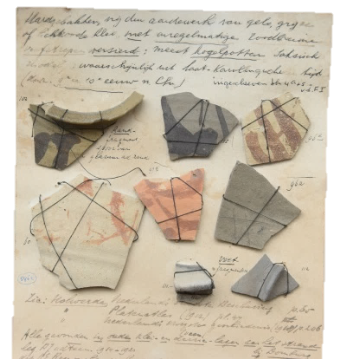 1. What is the Zeeland Society of Sciences?
The ‘Zeeuwsch Genootschap der Wetenschappen’ (or ‘Zeeuws Genootschap’) was founded in Vlissingen in 1769.  Since 1801 it been based in Middelburg.  Initially, the society’s aim was to ‘collect everything that God had created’ and to learn from those collections. The members hoped to contribute to scientific knowledge, both nationally and internationally. Eventually, the society decided to focus primarily on everything that was related to the province of Zeeland.  The term ‘Koninklijk’ (‘Royal’) was added to the Society’s name in 1969.  In 2019 the Society (often abbreviated to KZGW) celebrated its 250th anniversary.

4. The most important collectors and archeological researchers

Cornelis Anthony Rethaan Macaré (1792- 1861)
Rethaan Macaré received and bought coins and other small metal objects, including from the beach at Domburg-Oostkapelle, and donated these to the Society. Most of the objects were bought from the Van der Vate family, where father Adriaan sent his children to the beach during winter storms because that was the best time to find objects. Rethaan Macaré wrote two essays, one in 1837 and one in 1854.

Maria Goverdina Antonia de Man (1855-1944)
De Man was inspired by her father, a doctor who collected and studied ancient human bones.   Just as Rethaan Macaré, she focused on coins and other ‘small metal’ and she also donated her collection to the Society. In 1899 she wrote an extended article in the Tijdschrift van het Nederlandsch Genootschap voor Munt- en Penningkunde: ‘Que sait on de la plage de Domburg’ (what is is known about the beach at Domburg) in which she interpreted the drawings of J.C. Frederiks.

Hendrik Jan Boogaert (1837- 1901)
Boogaert was director of the ‘Zeebadinrichting’, the company that built the golf course in Domburg. Around 1880-1890 he bought objects from residents and displayed these in a pavilion in the dunes. Boogaert’s nephew, jhr. Hendrik Jan van Adrichem Boogaert, presented his uncle’s collection and a photo album to the KZGW in 1949.

Jan AdriaanTrimpe Burger (1923-2008)
Trimpe Burger was the first archeologist of the Province of Zeeland. From approx. 1950 he studied the Society’s collection and noted precisely where on the beach he found objects. In 1971 he designed the rooms with archeological objects for the new Zeeuws museum.

Johan Christiaan Frederiks (1827-1890)
Trained as a fine artist, J.C. Frederiks was also very interested in science. The archeological remains of Walichrum, close to his home in Oostkapelle, could be regularly seen from the beach during 1860-1866. Frederiks made a series of detailed drawings of these.  These drawings are the only known representations of the settlement (with the exception of a simple sketch by Adriaan van der Vate from 1836).  The archeological remains are now submerged.

Torsten Capelle (1939-2014)
In 1976 the German historian Torsten Capelle was asked to create a catalogue of the metal objects from the beach Domburg-Oostkapelle.  It resulted in ‘Die Frühgeschichtlichen Metalfunde von Domburg auf Walcheren‘, edition ROB 5, part 1 and 2. The catalogue has been used by many western European archeologists and materials experts as part of their research.

Pieterjan Deckers (1983-)
Much is now known about Walichrum, not least as a result of the 2013-2014 PhD by the Belgian archeologist P. Deckers:  ‘Between Land and Sea – Landscape, power and identity in the coastal plain of Flanders, Zeeland and northern France in the early Middle ages (AD 500-1000)’.  His research led to renewed focus on the Domburg-Oostburg collection, partly because of the current interest in the ‘dark Middle Ages’ which proved to be not as ‘dark’ as previously thought.

5. What is on display here?
The archeological collection of the KZGW has many small and a few larger objects that were found on the stretch of beach between Domburg and Oostkapelle that came from the early medieval settlement of Walichrum, just north of museum Terra Maris. Most of the objects are from the many graves that were found near the settlement. In pagan times people were buried with their most treasured possessions and these objects have been preserved in the clay.

In the early Middle Ages, the island of Walcheren was essentially a mudflat with, behind the dunes, an important trading post also probably called ‘Walcheren’. There were salt marshes and an occasional farm. People mainly used small boats to transport themselves, animals and goods.  People lived off the land, mainly by herding sheep and harvesting salt. But as the island was small, the inhabitants had to buy or trade some of their food and other goods.  They traded with people living all along the coast of the North Sea (Frisians), Scandinavians and Anglo Saxons.

We know from written sources that Danish Vikings raided Walcheren in 837. In 890 three forts were built on Walcheren to protect the population from marauders: Duinburg (Domburg), Middelburg and Zuidburg (Souburg).  Nevertheless, no tangible evidence has been found linking the Vikings to the trading post Walichrum,  or rather: Scandinavian-looking objects that have been found could just has well have been brought by Danes who sold, traded or lost objects there.

Around the year 1000 the inhabitants of Walichrum, fed up with being constantly windswept, moved to higher grounds on the island.  The remnants of the settlement and the grave fields could be frequently found on the beach in the period 1650-1960 as strong winter storms and rough waves washed the sand off the clay at the bottom of the sea. Many finds were donated or sold to the Zeeuws Genootschap.