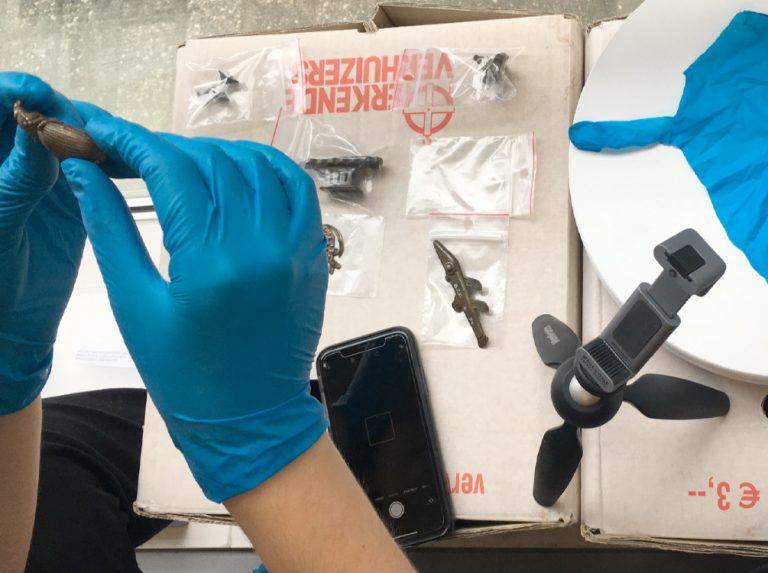 Over the last months, ten students of University College Roosevelt worked at Cultuurhuis Kuiperspoort on the Experimental Humanities project True Replicas in collaboration with the Royal Zeeland Society of Sciences (KZGW), hosted and supported by Zeeuws Museum and Erfgoed Zeeland, UCR’s Engineering Department and Technical University Delft. The first half of the semester, the students focused on cross-disciplinary object mapping of a selected series of KZGW objects. Varying from a fake stone axe to a 18th century quilt, and from a tiny Viking silver weight to a cowry shell: objects were researched from multiple angles, and disciplines, resulting in a visual mapping. These mappings and the resulting conclusions formed the basis for scenarios, in which the research was rendered into self-made replicas.

Goal
The goal of the True Replicas course was not to make the most literal copy of an original collection artefact, but rather to use prototypes to analyse, communicate and enhance those qualities of the historical source that arose from the cross-disciplinary research. Digital technologies and ‘analogue’ historical techniques and materials were merged. Technologies such as photogrammetry and 3D scanning techniques were explored as were 3D printing, mould making, CNC milling and metal forging. Making replicas allowed the students to articulate specific qualities of the historical source, and to isolate and communicate them through their reproduction.

Context
True Replicas takes place within the context of the Royal Zeeland Society of Sciences Research Fellowship of designer and researcher Maaike Roozenburg. The Fellowship strives to explore the change of value of objects over time. In a time in which material resources are no longer endless and the lifespan of products is getting shorter and shorter , this project reflects on how we value ‘value’ from a historical perspective, and what we may learn from this. The value of objects is neither stable nor fixed: it is determined by context, scarcity, historical and cultural meaning, function, location etc. It can be influenced and manipulated through actions of repairing, conservation, presentation and adaptation.

A significant part of the collection of the Royal Zeeland Society of Sciences has been appointed Dutch National Heritage. Starting in 1769, archaeological objects, naturalia, fossils, artefacts and maps were collected by enthusiasts and academics in order to serve as input for [Western] knowledge and science. True Replicas approaches the collection as ‘complex source material’ to critically reflect on its value in the present day, and share it in an innovative way with informed and lay publics.

Emerging technologies in the past decade have altered our view on how the virtual and physical (‘bits & atoms’) can co-exist and enhance each other: technologies such as 3D scanning, printing, milling and Augmented Reality have changed the way we interact with our environment and the objects within it. This creates new possibilities to render physical objects into digital data and vice versa, and ask questions about this translation process, thus allowing for new interactions with historical objects by the means of ‘replicas’.