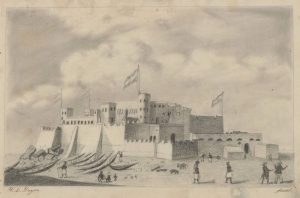 The West India Company in Africa, in particular in Elmina

The objective of this symposium is to look at the impact of the Dutch West India Company had in Africa, its actions there, the triangular trade, the company cooperation with African local leaders and its activities against Portugal.

The Dutch Chartered West India Company [WIC] was established on the 3rd of June 1621 with the purpose of eliminating Portuguese and Spanish competition in the Atlantic and in the America’s. The Dutch Republic was very interested in Brazilian products such as sugar, tobacco and Brazil-wood for its red dye. The trade in these products existed already before the WIC was set up, as was the presence of the Dutch on the Gold Coast in Africa, briefly, near Moree, in 1611 and 1612 .

However, because of the Iberian Union (1580-1640), trade with Portugal and its colonies, became more and more difficult. As a consequence, the first aim of the WIC was the conquest of Brazil for its sugar plantations. African slaves were needed for the sugar production. Thus, it was important to the WIC to be present in Africa. For this reason, the WIC conquered some Portuguese forts along western Africa, one of the most important places being Elmina in 1637, in the Gulf of Guinea. The gold mine, which gave the place its name, was nearly exhausted, but slave trade was possible and necessary for the sugar plantations and other activities in Brazil and later in Surinam and the Antilles.