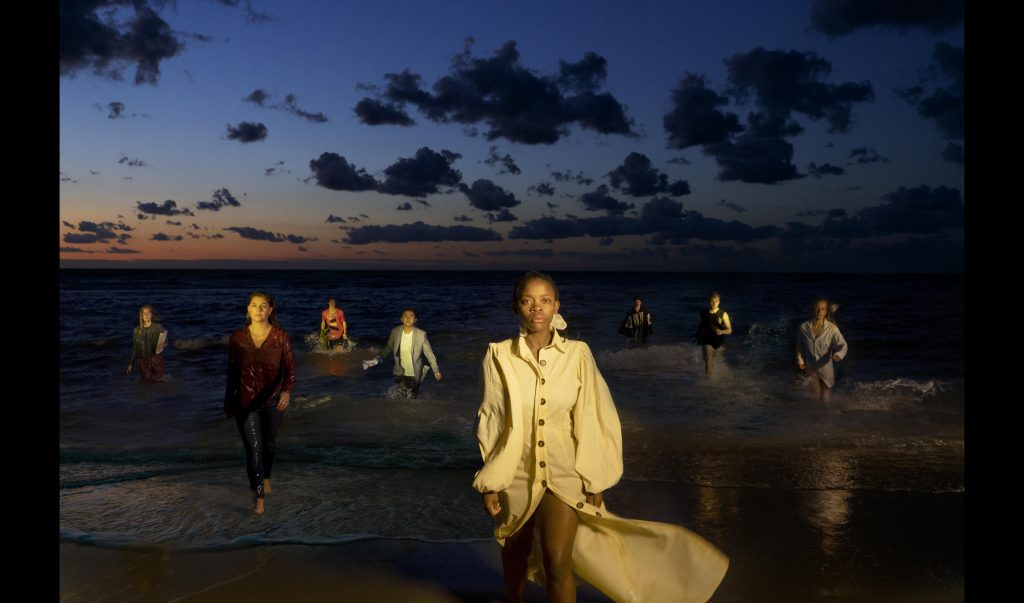 Dear board and members of the Royal Zeeland Society of Sciences,
It is with great pleasure that we present you with a gift in the spirit of the Liberal Arts & Sciences for the closure of the 250th anniversary of your learning society. This letter intends to give you an insight in the process that led to the making of this gift.
What can a prize medal bearing the motto NON SORDENT IN UNDIS (trans. we will not go under in the waves) signify in the context of 21st Century climate change – can the Liberal Arts & Sciences contribute, together, to the energy transition we are facing? What could be the value of a contemporary muse be, in our search for new directions and ways of living? Whom and what can a muse speak for, today? UCR students took these questions as a point of departure to take position for something they wish to defend / protect / care for, in relation to their disciplinary interests and (planned) major(s).
University College Roosevelt teamed up with photography studio Haak & Visser for the realisation of a re-enactment of the Zeeuw Genootschap medal from 1770. Below are the reflections of the student-muses on the adventurous photo shoot at Vrouwenpolder, on a chilly, windy night of September 2019. As you will see, we asked eight muses, not seven, to perform…
Bert van den Brink (Dean, UCR) & Sophie Krier (Art & Design Practice, UCR)

Petrouschka Verdouw
A group of students that barely knew each other were all open-minded to aid in this gift. Students studying liberal arts and sciences, experts in collaboration, students with broad interests, students that want to develop a complete mind. Not only by studying the science of art, or the science of science, but studying how to see that everything connects to everything else. I represented justice, justness between people, fairness and morals. Justice is required to give humans equal opportunities and to enable everyone to excel in their own way. Focussing on the individuals, but working together towards a safer world. Only by working together, we can face challenges and come to solutions.

Jeroen de Waal
I represent the science aspect of the liberal arts and sciences, and to complete the symbol I used a sunflower (because they are able to absorb radiation in radioactive zones). In the process of creating the gift, there was a moment when we were waiting outside in the wind, and to keep the piercing wind from blowing away all the beautiful yellow pedals of the flower, I had to cradle it using my body as a screen from the wind. In the same manner humanity has been protecting the environment of this planet on which we live. It is beautiful to see the liberal arts and sciences mindset helping us solve complex problems such as those seen in protecting and restoring the environment.

Karina Bukuri
Our choice of the style of the photograph as well as the context of props and costumes has a direct relation to the traditional story of Liberal Arts and Sciences and the 7 LAS muses. Our interpretation of the story, however,  is rather personal, portraying individual interests in the context of Liberal Arts Education. We’ve decided to combine subjects of our interests at UCR such as: LAW, Politics, Medicine, Psychology and Literature and illustrate each one of them with an object. On the picture all the props that are carried relate to an overall theme of LAS education as well as our personal stories. That is why you could see us carrying yoga mats, books, a megaphone and even a sewing machine! As 7 LAS muses in the original story each of us represents a particular field and an important role that this subject plays in the Liberal Arts Program.

Emma Kouwenberg
When we arrived at the studio to see the photo for the first time, I saw us with our attributes coming together. I feel like this is a beautiful way to portray how The Liberal Arts & Sciences study at UCR works. We combine all the different parts of Sciences and Arts. But instead of separating the differences between them, they get combined. This gives a broader view to many problems and help us give more solutions. I think we need to look at problems from different perspectives more often.

Anne-Fleur Remorie
When looking at the image with the concept of climate change in mind, it tells the following story: Us, all students of the liberal arts and sciences education, representing different disciplines, all went our separate ways and have tried to conquer the problems we need to deal with regarding global warming. We all did not succeed in finding a solution and were swept away by the water and the waves. We now finally have the same vision, which for me is represented by Barbra. We all have to gather our ideas and skills to conquer this problem together. We all look very determined to do so.

Babra Nalwoga
When l was first invited to join this project, I immediately thought about all the generations of students who would come into contact with the image we set out to create. The world is changing in ways we can’t imagine. This rapid change is creating something of a shared anxiety among world citizens. Things are not straightforward anymore, we don’t know what we will have to teach our children (if we have any) in order to prepare them for a future so alien. This project offered a solution somehow; teach them everything, let the image of a traditional scientist be transformed into one of a poet whose subject of focus is energy transmission, and who writes about such complex phenomena like Shakespeare wrote about love.

Marijn van Iwaarden
In these times where very complex issues arise, complex solutions are required. Mental illness has been rising in the 21th century and simply studying one field is not enough anymore to fully tackle large problems such as these. In the liberal arts and sciences we combine all fields to create a synergetic, creative power which we can use to make difference that has not been seen before. In this project, we symbolically united these fields in an attempt to display the power of the liberal arts and sciences. While each own discipline is necessary and important, a combination of the fields creates a whole.

Sithis Yim Samnang
The chilly thrust of the wind upon our faces and bodies was one of the million struggles that humanity drags itself through. For I represented a politician, an ostensible dynamo of freedom, my megaphone jolted us forward with a verbal conclusive power. The power, which now rests upon the designs of all muses. The power, which is now imminent with the unity of wisdom. The power, which comes with the urgency of the unstable darkness of weather. My megaphone will speak the words of wisdom. But we, who hold the power, have arrived with a front to open the floodgate of determination and hope.

Sophie Krier wishes to acknowledge Anya Luscombe and Barbara Oomen for their precious role in enabling the process of making this gift, and extend a special thanks to Gerard Heerebout for tracking down the following information: Cornelis Ploos van Amstel, who designed the medal, positioned his version of the seven liberal arts on the rock at sea slightly differently from the traditional Trivium or Quadrivium: on top are Astronomy and Music, then follow Poetry and Arithmetic; Painting sits in the middle; and below are Architecture and Measurement (freely translated). The other side of the coin depicts Minerva, the muse of justice, with an owl at her feet, representing wisdom. On her helmet is a sphinx, symbolizing the answering of questions. Gerard further observed that the Society adapted the original design by adding a small ship to the image. Retrieved from: PLOOS VAN AMSTEL, J.H.R. G., Portret van een koophandel en uitvinder, maatschappelijk, cultureel en familieleven van een achtiende-eeuwer, Assen : Van Gorcum, 1980, p. 153.